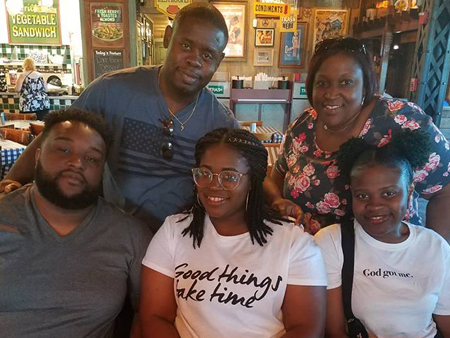 Jackson resident and business owner Albert Wilson intends to run for governor of the state of Mississippi. Wilson, age 53, is the executive director and founder of Genesis and Light Center and has a background in business, computer science and education. Born and raised in Jackson’s Georgetown neighborhood, Wilson saw negative influences that threatened his future but was determined to have a life of positivity and give back to others like him. He is an alum of Wingfield High School and earned a bachelor’s degree in Computer Science with a minor in Mathematics from Jackson State University in 1989. He is on track to earn a Master’s of Education degree from Mississippi College in August 2020. Wilson is married to Kim Wilson and they have three children, Bryson, Victoria and Brittney. He is the son of Mr. Howard Wilson and Mrs. Mildred Wilson (deceased).

Wilson is a member of Relevant Empowerment Church in Jackson and serves as the director of Christian Education and teaches Sunday School. His nonprofit organization, Genesis and Light, was originally founded in 1991 during a season where Wilson lived in Illinois working for Fermi National Accelerator Laboratory as a computer professional. He built solid leadership and business skills in the area of computers and information technology, in addition to gaining classroom experience as a geometry teacher in the Jackson Public School District. Not to mention past experience as program coordinator for Operation Shoestring that enabled him to organize social service programs, create software games and assist with budgeting and accounting.

Today, the community center that Mr. Wilson founded serves students from kindergarten to age 18 and senior citizens in the Jackson community in need of supportive services and workforce skills. The center provides workshops and seminars on relevant issues (e.g. opioid addiction) that raise awareness to problems facing the community. Additionally, hundreds of low-income children benefit from the afterschool program and summer programs that provide opportunities for healthier living. The meaning behind the center’s name stems from its purpose of enlightening Mississippi communities to better ways of living.

Under Wilson’s leadership for more than 25 years, Genesis and Light has offered services in Illinois and Mississippi cities of Jackson, Natchez, Hazlehurst, Yazoo City, Tunica, Forest, Canton, Greenville, Durant and Utica. Afterschool services have impacted over 30,000 disadvantaged youth and summer programs reached over 10,000 disadvantaged youth. The organization also produces stage plays, putting on eight productions with over 50 performances by over 160 drama club members. Quality of life has improved for over 600 senior citizens. Mississippians also support the business by renting the facility for special events, and the center has organized more than 50 empowerment seminars, community fairs and other ceremonies. Genesis and Light has employed over 250 individuals, offered volunteer work to over 3,000 and has helped 50 individuals find employment – evidence of Wilson’s experience leading Mississippians to new economic and educational opportunities.

Mr. Wilson is a humble leader of Genesis and Light and works with eight staff members, ten AmeriCorps VISTA Associates and dozens of volunteers needing service hours for work and school. The organization operates off donations, organizes fundraising events and grants. As candidate for governor, Wilson touts his business and technology expertise and ability to connect with people of all ages and backgrounds. He understands the needs of everyday Mississippians and has a desire to give back to the people who poured into his life when he was a young man struggling to remain on the straight and narrow path.

“We have really helped a lot of kids – who were on their way to failure to pass their grades, on their way to drugs and crime – to resist those environmental issues,” Wilson said in an interview published in the Northside Sun newspaper. “Our senior citizens, if they weren’t coming here, they’d be at home waiting to die. Their quality of life wouldn’t be as good. We engage their minds, get them active again (and) get them renewed for life.”